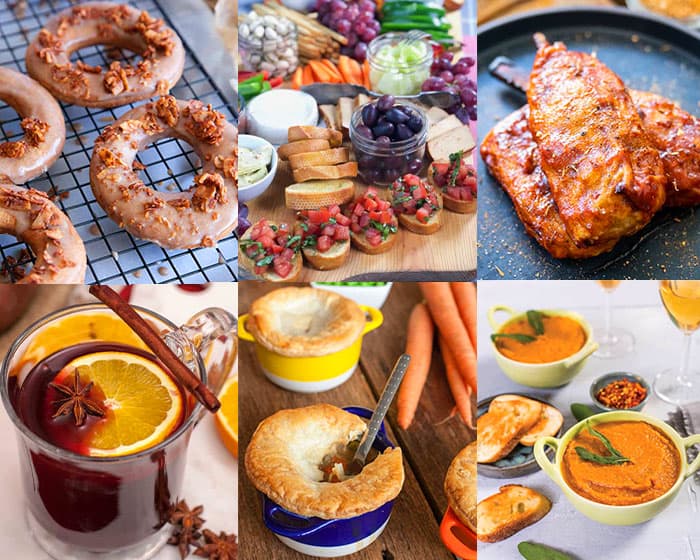 My 600,000+ followers and readers across The Edgy Veg platforms always ask for vegan thanksgiving recipes, so here is a list of all my vegan thanksgiving mains, appetizers, and desserts to make your thanksgiving dairy-free, cruelty-free, and perfect for family members with allergies to animal products as well! Enjoy! Turn this realistic vegan drumstick recipe into a Vegan Turkey Drumstick by swapping out the seasonings here for classic turkey seasonings like fresh sage and rosemary. I promise while you cook these your kitchen will smell like a homey Thanksgiving feast. Without the breading stage, these are both Thanksgiving tasting and gluten-free! Get the recipe here!

I discovered how to make an easy vegan turkey roast that’s quick & tasty! I wanted to make it easy for you to make a vegan roast for the holidays, so I’m going to show you how to take a $5 store-bought vegan roast (like tofurkey) and take it to the next level by roasting it with veggies and seasoning!

I’ve unfortunately seen families order KFC chicken for thanksgiving, so I wanted to give a vegan KFC chicken alternative for families! Also, I’m the queen of vegan fast food copycats, so needed to share not only my KFC vegan chicken recipe but also my recipe for Vegan Popcorn Chicken and Vegan KFC Fried Chicken recipe. Get the recipes here!

Tip: Turn any leftover slices into my thanksgiving burger sandwich! This dish is perfect if you’re the only vegan going to a Thanksgiving meal. A meaty, hearty and easy veggie Shepherd’s Pie; made with a saucy mushroom and ground round stew, filled with corn, peas and carrots, and topped with fluffy mashed potato. It’s great to prepare ahead and bake when you’re ready and it’s gluten-free! Get the recipe here!

This is the best vegan fondue recipe out there! This dairy-free cheese fondue is perfect for thanksgiving whether you’re having a group of people for dinner or dinner for two. Everyone can dip whatever they want into this gooey deliciousness! Get the recipe here!

This easy, fall-flavour mac & cheese is the perfect pasta for Thanksgiving. It has a traditional mac and cheese flavour with an added squash kick. It pairs perfectly with a Thanksgiving Dinner. Swap for gluten-free pasta if needed! Get the recipe here!

These vegan pot pies are perfect for smaller thanksgiving gatherings, or to make with Thanksgiving leftovers! Repurpose your vegan turkey and veggies into these individual pot pies. Add Thanksgiving flavours like rosemary and sage to make these even more like turkey pot pies. Get the recipe here! You can’t have a vegan thanksgiving without stuffing! And followers have been making my vegan stuffing for thanksgiving year after year – it’s a fan fave for a reason!

This delicious mushroom stuffing tastes just like traditional Holiday versions that you grew up with, but completely vegan. This vegan stuffing is baked in the oven and is just as moist and fluffy as the turkey version. Stuffing is an easy vegan swap you can make at a Thanksgiving dinner! Get the recipe here! A Thanksgiving grazing table can be thrown together quickly while you can continue hosting your family or guests! So simple but always gets completely picked over before dinner is even served. This is also perfect for families with an array of dietary restrictions, I like to add decorative little signs to show which vegan cheeses I chose and which crackers are gluten-free. Get the recipe here!

This easy dip is perfect for a Thanksgiving focussed on football. Spicy and creamy, no one would suspect it’s vegan. Swap bread with carrot and celery sticks for dipping to make this gluten-free and so your crowd doesn’t ruin their appetite before the feast. Get the recipe here!

These are super easy to make (especially if you forgot you needed to bring something to dinner). 5 simple ingredients and super yummy, these make a perfect pass-around appetizer while folks are mingling or watching the game. Get the recipe here!

This vegan creamy baked spinach dip is super easy to make and perfect as a snack, or for your dinner party. Pair with the buffalo ‘chicken’ dip for a set of vegan and gluten-free dips made in heaven. Get the recipe here! If you’re looking for a vegan brussels sprouts recipe with roasted, garlic brussels sprouts and vegan bacon and sausage, you’ve found the best recipe! These are easily the best veggie side on your Thanksgiving table, and they’re gluten-free. Get the recipe here!

You can’t have a vegan thanksgiving without vegan gravy! This 10-mins easy vegan gravy recipe uses 10 simple ingredients & makes the best vegan gravy for thanksgiving. It uses a broth base and cornstarch mixture to replicate the flavour and thickness of classic gravy. Get the recipe here!

The pumpkin in this veggie chilli is light and nicely balanced. It gives this traditional recipe a nice and earthy element perfect for Thanksgiving. Plus it can be whipped up in just 30 mins or less! This big, warming bowl of veggies is gluten-free. Get the recipe here!

Vegan cheesy cornbread is not just a fantasy, but brace yourself, because once this cheesy goodness comes out of the oven, it is hard not to devour it all. The slightly spicy kick will leave a taste in everyone’s mouth that will leave them wanting more. Best to make a double batch. Get the recipe here!

This soup-er simple side is warming and full of classic Thanksgiving flavours like sage and pumpkin. It’s an amazing gluten-free option and a great way to get veggies on the table in a new way. Get the recipe here!

This recipe is sure to show your family that they can have a plant-based Thanksgiving meal without the need for meat, eggs or dairy. Oh boy, this is decadent. Get the recipe here!

Using almond milk and cauliflower as substitutions to heavy creams also makes this casserole a healthy option. Fortunately, with this recipe, you don’t have to choose between healthy or delicious because it’s both. Get the recipe here! Everyone always looks forward to dessert, so here is my list of vegan thanksgiving desserts you can make!

I love vegan pecan pie! What makes this recipe different from the traditional pecan pie recipe is the vegan pastry dough base, the brown rice syrup to replace corn syrup, coconut sugar to replace regular refined sugar, and flax meal to substitute for eggs. I also highly recommend a vegan whipped cream or vegan vanilla iced cream to top it off. Get the recipe here!

If you have an air-fryer, you have to try these Vegan Air Fryer Cinnamon Rolls from Rescue Dog Kitchen! Using 10 simple ingredients, you can literally make a batch of gooey cinnamon rolls in the air fryer, it’s pretty magical. Get the recipe here!

These pumpkin spice muffins are only 2 ingredients! If you were assigned dessert duty this Thanksgiving but you’re not a great baker, these are perfect. All you’ll need for this recipe is one boxed pumpkin spice cake mix and one can of pumpkin puree, dessert is done! Get the recipe here! Another thing people always look forward to during thanksgiving is drinks, so here is my list of vegan thanksgiving drinks you can make! You can also make them non-alcoholic!

This vegan pumpkin spice latte is better than Starbucks! And it’s perfect for pre-dinner drinks or you could serve it with dessert! Get the recipe here!

This simple vegan Irish cream replaces the Bailey’s Irish Cream that people add to their coffee. For those who want coffee after dinner, you can ask if they’d like some bailey’s add to their drink. Get the recipe here!

Cranberries are so thanksgivin-ey. My recipe for cranberry mimosa’s are vegan and uses no additives! Enjoy with dinner or with dessert! Get the recipe here!

Impress your guests with this vegan whiskey sour recipe. The secret ingredient for the classic whiskey sour foam will surprise you! Get the recipe here!

This warm and fragrant wine is a nice way to settle into a cozy family evening as the weather gets chilly. When the sun goes down, this warmed wine and a fuzzy blanket are the best ways to end the night. Get the recipe here! If you’re looking for only vegan gluten-free Thanksgiving recipes, check out the blog post with all my recipes that could be made gluten-free.

Hope these delicious vegan thanksgiving recipes fill up your tummy with love & deliciousness! Hi! I’m Candice aka The Edgy Veg!  I veganize popular food recipes for vegans, plant-based diets, eco-conscious eaters & people who are trying to eat more plants over… y’know animals or by-products of animals. I hope you enjoy this tasty vegan recipe!