Cell Cultured Meat: Is it Vegan?

In-vitro meat is controversial. Is it vegan? It is ethical? Should vegans support it or fight against it? I’m here to lay out my opinions even though no one asked…

As someone who has built a career in the vegan space, I am always interested in the new ways we can potentially evolve veganism, and make it appeal to a larger audience. Is In-Vitro one of those things? To answer that, let’s start at the beginning. For the last 12 years as a vegan, I have been firm on my stance on why I chose this lifestyle. I am an ethical and environmental vegan, I am not vegan because meat doesn’t taste good, or because I’m looking for a fully whole-foods, plant-based diet. I am vegan because I love animals and I am against animal cruelty and have a deep passion for protecting our home on this planet. This drives my decision to engage in this lifestyle.

So, What is Cell-Cultured Meat?

I typically refer to it as “cell-cultured meat” or “in-vitro meat”, but it goes by a ton of names such as lab-grown meat, clean meat, cell-based meat, and cultured meat.

There are a few start-ups and existing food companies that are researching and developing this industry currently, with plenty of RD and focus on using new technologies. They are specifically competing to develop chicken, fish, and beef that doesn’t require the breeding, raising,  and killing of animals (and the many tortures of this practice) for food. Currently, the focus is mostly on beef, with other meats as a secondary priority, and as of late, even dairy.

These companies are fairly private about their processes, but they have shared that, “the beef is made by painlessly harvesting cells from a living cow and multiplying them to create muscle tissue, which makes up the meat we eat”.  Sounds pretty great, huh?  But, is it the same? From a biological perspective, it is the exact same meat tissue as the material that comes after killing and butchering a cow. It is technically animal flesh, but only ever exists in the form of a mass of meat, meaning it is not “alive” and has no brain, face or feet. Great! But, who is making it?

A familiar vegan face that is participating in the cell-cultured meat industry is Eat JUST, the same people who make popular vegan egg and mayo. Some of the largest companies are in the USA, Israel, the Netherlands. The FDA and USDA have referred to it as “animal cell culture technology” and they are the two U.S. agencies that will jointly oversee regulation. Moss Meat is also making it.

Cell-cultured meat is definitely controversial, particularly in the vegan community. While it is (allegedly) cruelty-free, it is still an animal and not a plant. So eating it is technically not vegan. But it does skip over the process of factory farming and the slaughter of animals, so it could be considered ethical. Like everything else in life, it’s a weird, grey-area, with plenty of nuances.

In-vitro or lab-grown meat would allow people like me who are ethical vegans to enjoy the meat flavours and textures they once loved without the carnal elements of meat-eating, like breeding, raising, torture and death. It would still not apply to health-based vegans as the nutrition of this meat would be similar to that of animal-based meat, with a few distinct changes (high antibiotic use in factory farming).

Ethan Brown, The CEO of Beyond Meat has said, “there are two ways you can look at meat, one is meat comes from a chicken, a cow or a pig, but you can also think about meat in a different way- which is what is meat made of”. That’s how Beyond thinks about meat, and if you also see meat as what it is made of, you may be able to ethically enjoy meat again. But, that decision ultimately has to be made by you.

Another ethical issue I have with the meat industry is the abuse and exploitation of workers. A large percentage of factory farm workers are people of colour, migrant and undocumented workers from Mexico and Latin America. These are the ideal candidate for the employer of the factory farm since they are easier to exploit with low wages, unsafe work environments and unfair treatment. Employers are also not required to provide medical or mental-health-related benefits despite working in an environment with many many serious health threats including brain damage, depression and other serious mental-health issues, miscarriages and birth defects. On top of all this, the differences in language and culture often leave workers feeling like outcasts in their new community. By moving from factory farming to lab-based meat, jobs would be offered to people to work in these more safe and sanitary conditions without having to interact with distressed living animals, and witnessing and inflicting death daily.

Why choose this over regular meat?

As far as I know, it is better for the environment in the long run, and it cuts out tons of methane emissions, water usage and grain and soy over-farming that is done to feed factory-farmed animals. And that’s on top of the assortment of environmental and social injustices that motivate the need for cultured meat, like; microplastics in our oceans, toxic water pollution, greenhouse gas emission, and many other detrimental effects. We can see that change needs to happen, and fast. While many people choose a vegan lifestyle, most do not. But, switching their meat consumption to lab-grown meat in place of factory-farmed is a great option for the rest to meet us halfway. In turn, making a HUGE impact to reduce our carbon footprint.

Will I eat it myself?

I will admit, this is a tough question for me to answer. It’s a very grey area. But, I am in support of it for the greater health of the animals and our planet. I likely wouldn’t eat it myself because I don’t miss animal meat from my diet after 12 years of being free from it, and I can get everything I need from vegan ingredients instead of lab-grown substitutes. But, I support those that would choose to eat it.

Is it vegan? In my opinion, yes and no. We can’t forget that this is in fact an animal product, although it can be made without the slaughter of an animal. It’s a question of philosophy. Let’s take the trolley dilemma: would you kill one person to save five? I believe it is up to the individual. It’s your choice. If you do all the research necessary and ethically feel okay about eating it- then who I am I to say no? Even the process of farming fruits and veg comes with animal death. Personally, I choose to do the least amount of harm possible- which is why I am vegan.

I would love to live in a perfect world where everyone goes vegan, but it’s just not realistic. Not everyone will or wants to live that lifestyle, but if they can make the small switch to lab-grown instead of factory-farmed animals, then I am in support of that. I do think it is important for vegans to be on board with it, and advocate for funds to be diverted from traditional animal agriculture practices to perfect this scientific breakthrough, which will eventually make it accessible to the average person.

The TLDR of it is this: lab-grown meat is the most effective way to get most people on a diet that doesn’t kill animals.

It has so many uses including growing meat to feed our companion animals. Dogs and cats eat a largely meat-based diet and if we can replace that with lab-grown alternatives, we can keep animals in a better balance ensuring pets can eat and other animals don’t have to suffer as a result.

But, as with everything… I don’t want to act like there are no downsides to this process, there is a line from a Reddit post I saw where someone shared their opinion and they said:

In order to get lab-grown meat into the mainstream market, there is lots of animal testing that would need to be done to fulfill the regulations put in place for food, like with any new product. Animals will undoubtedly suffer as a result of this testing for fewer animals harmed in the long term once these products are available to everyday people.
So is it ok to sacrifice a few, to save many? It’s obvious that we all want to do our part to reduce harm, but if we consider that everyone has equal rights, then it would be wrong to sacrifice one even if our intention is to save five isn’t it? I do not have a clear-cut answer for you, because it simply is not black and white. What I do suggest, is that you do all you can do to educate yourself on the topic, and then make a decision based on where you stand morally. <3 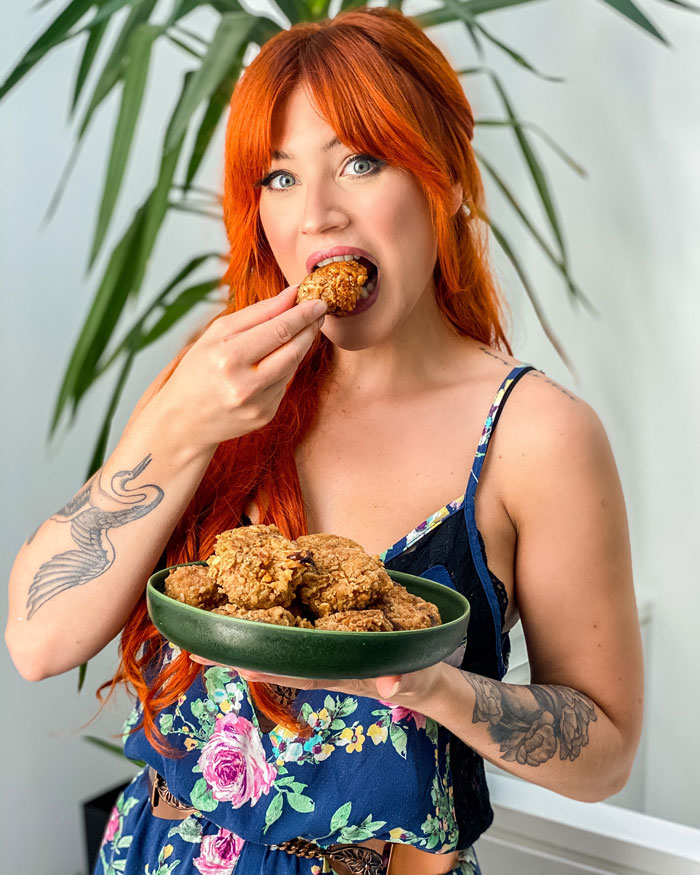 Where to find Eco-Friendly Menstrual Products Prev. article
Types of Oils and How To Use Them
Next article
A Vegan's Opinion on Lab Grown Dairy