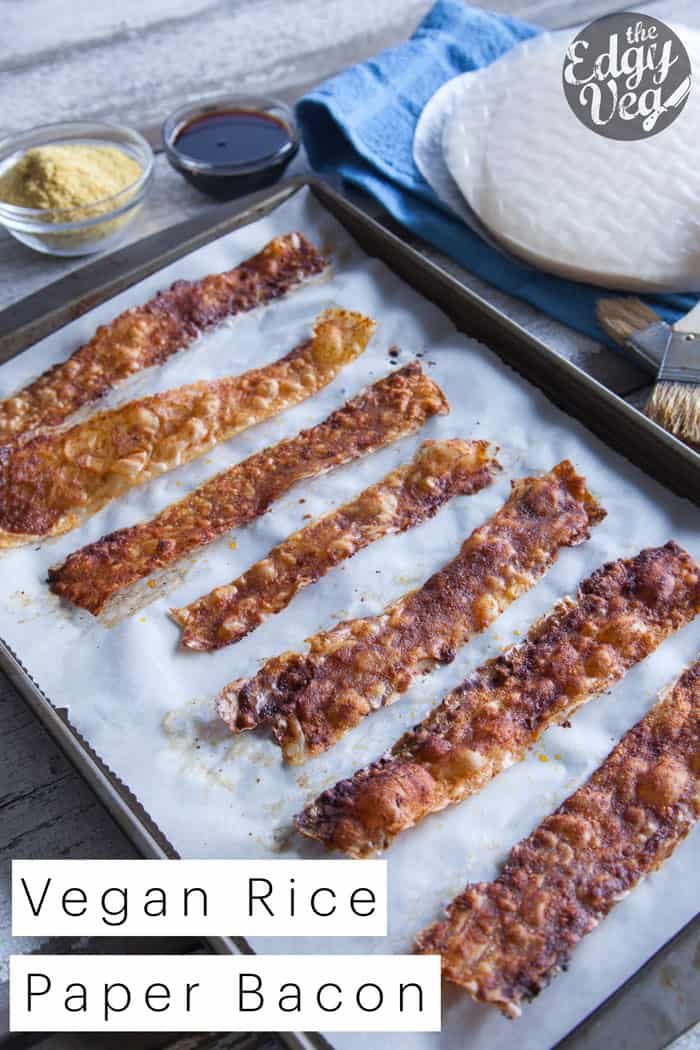 Bacon is one of the most sought after foods in the entire world. Although not the healthiest food you could be eating, it certainly is one of the most delicious. People all over the world and all over the Internet have fetishized bacon almost to the point of exhaustion. I mean honestly if I hear one more person scream BACON at me in the comment section, or watch one more poor innocent meal get wrapped in bacon and deep-fried, I am going to burn my laptop and disconnect—just kidding, I wouldn’t last 15 mins without Snapchat or Pinterest. But alas, this trend does not seem to be going away, and so I must embrace it the best way I know how—Veganizing it.

Growing up, I didn’t eat much bacon as my mother was a Seventh Day Adventist vegetarian and the Bible described it as an unclean food. But being a child of divorced parents, my dad would serve it with breakfast, and on a handful of occasions I tried it—but it never made it into my regular eating patterns. Growing up in the country by a vegetarian meant that we were often exposed to farm animals, and so eating meat just didn’t appeal to me. I think much of this had to do with this animal exposure but also my mothers strict views on diet and eating, She described pork, bacon, ham to us as animals, instead of food; so it wasn’t just a plate of bacon—it was a plate of dead pig. When it came to food, and slaughter, my mother was always very honest about where it came from, and made sure that we were always thankful. To many people this may seem like an odd way of parenting, but in hindsight, this type of honest parenting is what made me compassionate towards animals, seeing them as equals with intelligence, and drove me to eventually become a vegan in my adult life.

For Vegans, the bacon alternatives are limited, and fail to live up to the standards that bacon lovers have come to expect. And let’s face it, most of us did not become vegan because we didn’t love the taste and smell of bacon, we became vegan because pigs are individuals that deserve love off the plate as well. Neuroscientists have studied and found that pigs share a number of cognitive capacities with other highly intelligent species such as dogs, chimpanzees, elephants, dolphins, and even humans. They are often compared to having the intelligence similar to that of a 3-year-old human child. So if you wouldn’t eat your dog or your toddler, you shouldn’t be eating a cute fuzzy piggy. 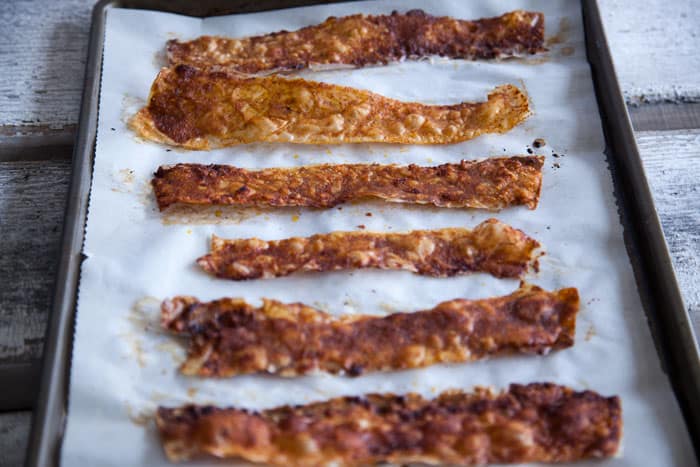 As a society we have desensitized ourselves to what meat is and where it came from. And since we are a culture that very much identifies with food, and bacon as it’s own food group—I made it my mission to be able to look every “I would be vegan – but bacon” bacon-loving wannabe vegan in the eye with a piece of bacon and say, “Now you too can become vegan…” What is this magical bacon alternative I speak of? Making vegan bacon out of rice paper and a bacon marinade. Yup, rice paper, that stuff vegan up until now have been using to make salad wraps with. Blech.

This bacon gets it’s favor from a marinade made with Tamari, olive oil, nutritional yeast, garlic powder, liquid smoke, MSG or mushrooms seasoning, and maple syrup. These ingredients together provide you with umami, smoky, salty and slightly sweet flavor very similar to bacon. This recipes does take a round or two of practice as the rice paper can be hard to work with, but trust me when I say; it is the BEST alternative to bacon I have tried yet! I didn’t come up with this concept, but here is my version.

Try it wrapped around king oyster mushrooms, as an alternative to bacon wrapped scallops, or wrap it around a veggie dog and grill it, Bacon wrapped dates as a chic, sweet and salty hor d’oeuvres anyone? Anything you could normally wrap bacon around you can definitely wrap this vegan bacon around, you could even have bacon on your veggie burgers, in sandwiches or crumbled on top of your salad. Don’t be afraid to get creative. While it is impossible to truly duplicate the flavor of actual bacon I think this is as close as you’re gunna get!

What are you waiting for? Get out that bowl, whisk, and rice paper and get cooking! 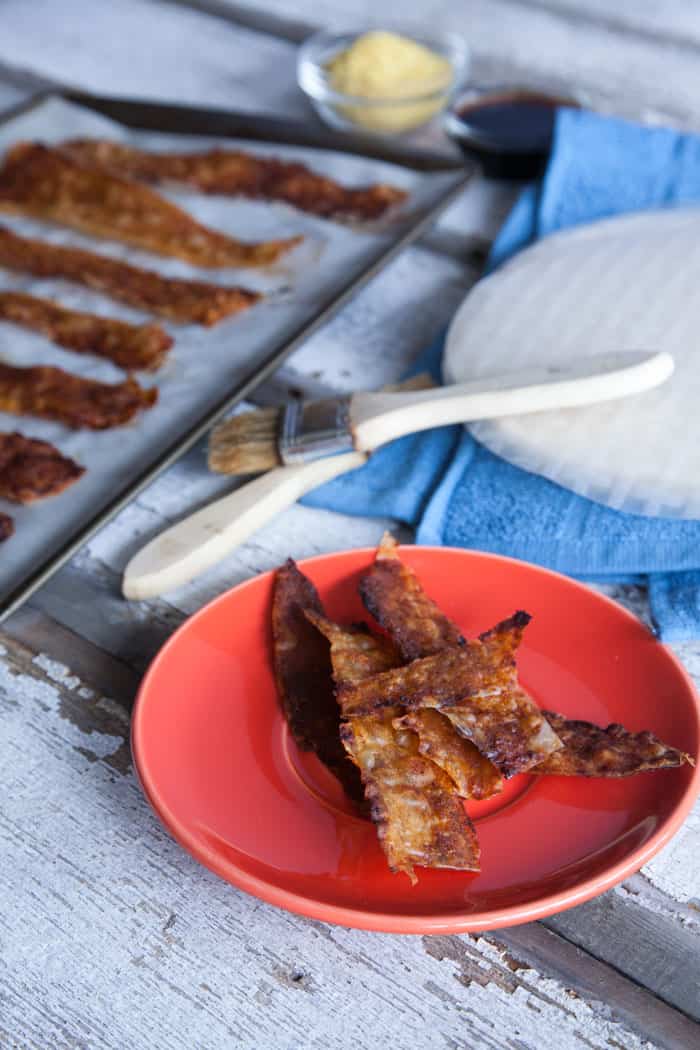 Save Print
Prep time
20 mins
Cook time
7 mins
Total time
27 mins
This is by far the best vegan bacon out there. I have tried many different types and this is by far the crispiest, meatiest vegan bacon out there.
Author: The Edgy Veg
Recipe type: Vegan
Cuisine: Vegan
Serves: roughly 30 pieces
Ingredients
Instructions
Notes
If you like softer, chewier bacon follow these preparation instructions instead.

1. Cut the recipe paper sheets into strips as instructed above.
2. Place sheets into the bowl of water until soft, remove from water and carefully lay one on top of each other on a cutting board. Removing excess water with fingers and allowing to dry for 2 minutes or until they have fused together.
3. Dip this strip directly into the marinade, and remove excess with fingers, and place on the baking sheet.
4. Bake as directed above.
3.5.3251